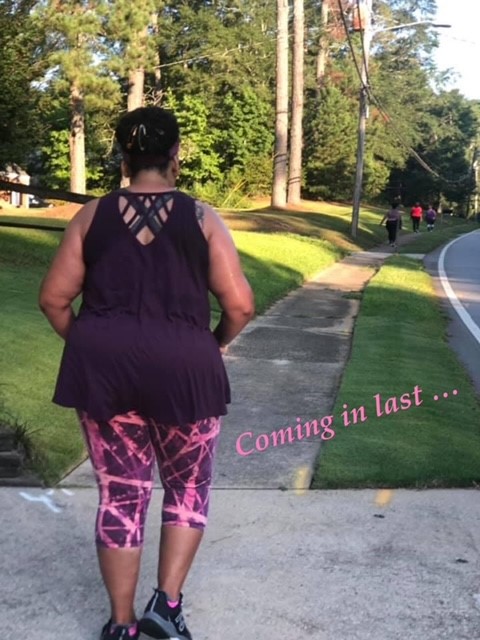 Let’s Talk About Coming in Last

There’s a saying that goes like this: “Don’t compare yourself to other people.”  How often do we do that, though?  Comparison can lead you to greater heights. It can serve as the motivation you need to push a little harder and achieve a little more than you ever would on our own.

But, far too often, comparison has the exact opposite effect.  When you see others succeed in ways that don’t come easily to you, it can be tempting to throw in the towel altogether.

Does this happen to you?

Working out, being physical, conquering any workout routine is a personal journey not to be compared with anyone else’s.  Come in last all you want to.  There have been multiple times I have come in last, and as a matter of fact, normally when I’m out on the pavement walking or running, I still come in last.  I just celebrated by fifth year anniversary with Black Girls Run! in June 2021, and I am still coming in last.

If you are still peeking in on others’ workouts, if you’re still scrolling the Facebook pages of the meet-ups and not getting out there and not moving, I’m here to tell you that coming in last has bountiful benefits.  The bountiful benefits of weight loss, increased energy, increased desire to workout, increased joy and decrease of stress.

It doesn’t matter if you come in last.  Just coming in at all means you’re out there taking care of yourself.

What is Black Girls’ Run! goal?  To encourage and motivate black women to practice a healthy lifestyle.  It doesn’t state to come in first.  So come join me and come in last.  I’ll show you what coming in last does for you.